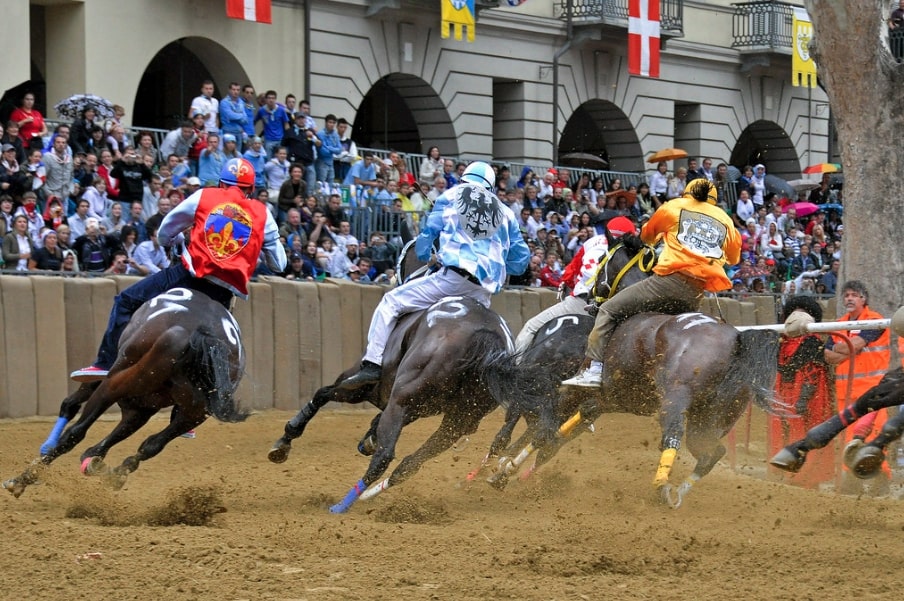 The Palio of Asti is the oldest horse race in Italy.
It is a conventional festival of medieval foundation. It turned into originally held in may additionally throughout the festivities of client saint San Secondo, however considering the fact that 1967 it takes location on the first Sunday of September. This 12 months, the Palio di Asti could be held in Piazza Alfieri. The 2019 edition of the Palio has won from Rione Cattedrale and Comune di Baldichieri.

Every year, during the September of Asti (Settembre Astigiano) the districts, the villages and the towns of the city challenge each other in a race of horses mounted to sleep, to win the “cloth” up for grabs.

For almost 1000 years now in the center of the city of Asti, in September the Palio (after 1 week there is the Asti festival of festivals and Asti Palaces of Taste 2019) is run, the historic horse race. To compete in three batteries are the 6 districts, 8 villages, and 7 municipalities, which bring their colors to the most awaited event in the city of Asti. The Palio of Asti was run through the streets of the city until 1861. Later, in 1967 the horse race was held in Piazza Campo del Palio, the largest square in Italy. Instead in 1988, the track was moved to Piazza Alfieri, the triangular square symbol of the city. 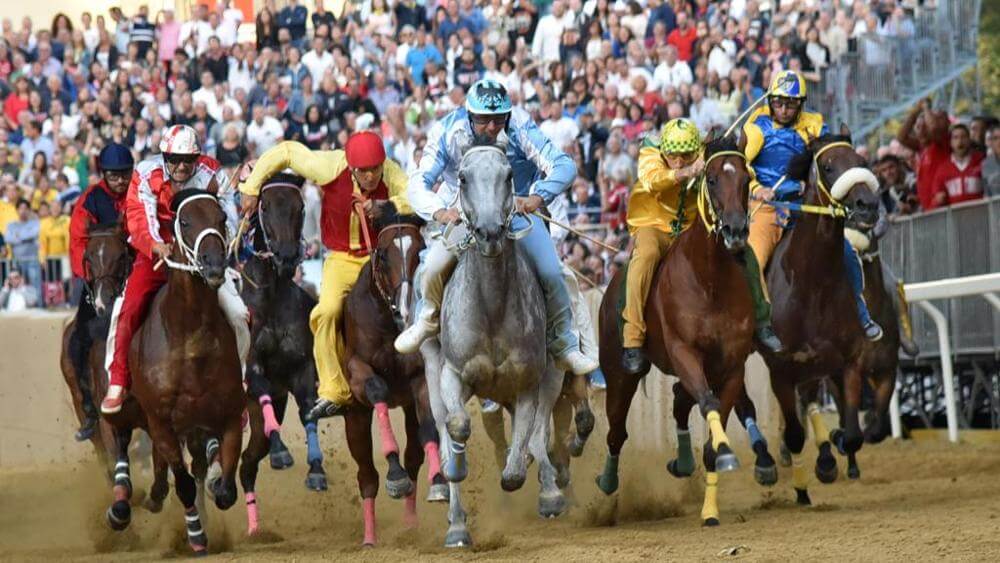 The Palio race is an event that is heard throughout the year, in fact, during the month of May the villages and the districts challenge each other in the Paliotto, an exciting challenge of musicians and flag-wavers. Here, the musicians perform with drums, trumpets and snare drums, to support the performance of the flag-wavers. In the weeks leading up to the Palio, the streets of Asti are filled with flags and colors to delineate the areas of the villages and districts. In the previous months, as usual, the “Estimate of the Palio” is presented, the Captain of the Palio and his ministers. The week before the Palio, the square is set up with sand to create the track and the stands for the thousands of spectators who attend the stake every year. 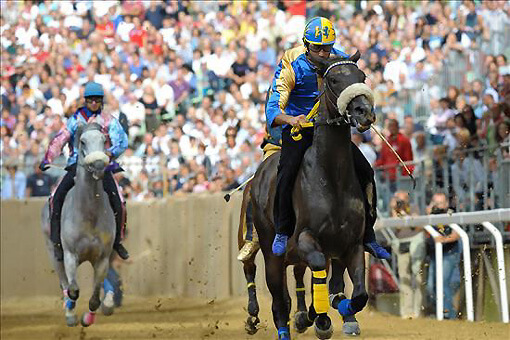 The days before the race, there are many events that introduce the horse race. In fact, in Piazza San Secondo, the patron saint of the city, from Thursday before the Palio, each district and municipality suburb presents itself withstands dedicated to the sale of representative objects of the district or village. On Friday and Saturday evenings before the Historical Horse Race, each participant at the Palio organizes propitiatory dinners. On Saturday afternoons for the cities of the historic center, the children of the districts and villages will parade wearing clothes representative of their own ward, while instead of the historical theme parade will be held on Sunday of the Historical Horse Race. Each district, village, and the municipality will parade presenting a historical and representative theme to challenge each other in the best procession, following the regulation. 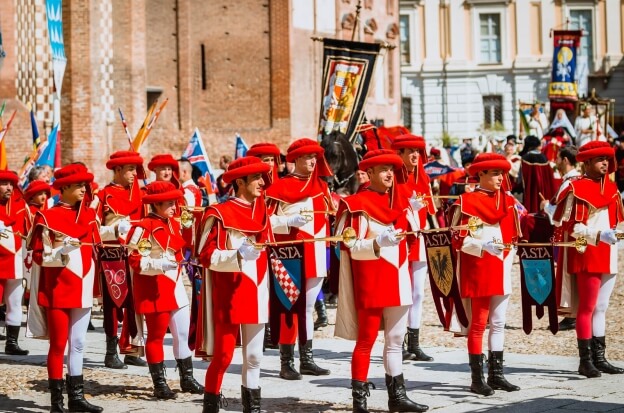 With the exception of the 2019 edition, the Palio since 1988 always takes place in the same way: 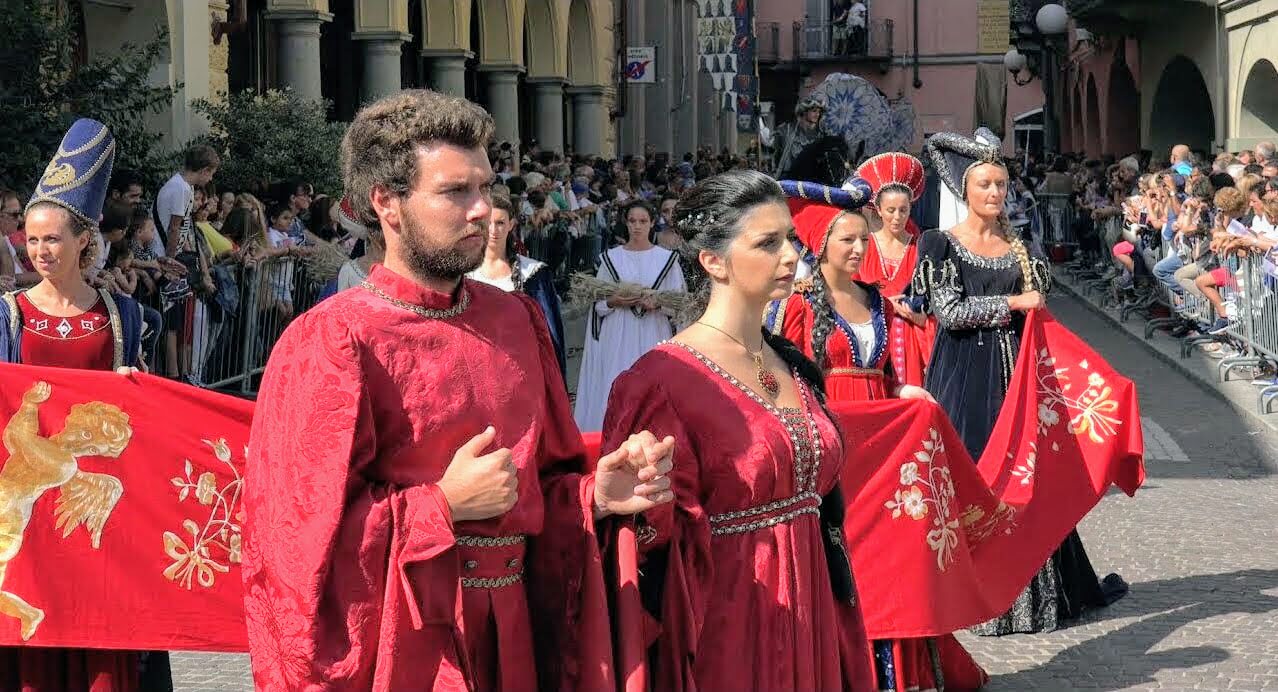 The 2019 edition, to celebrate the 1900 years since the martyrdom of San Secondo, the patron saint of the city, will see two winners. In fact there will be two batteries dedicated to the challenge between towns and districts of the city, and before their final, the municipalities will compete. Decreed the winner among the municipalities of the city of Asti, the final will be played between the villages and the districts.

The victory of the Palio the historic horse race

In addition to fame and glory, every district, village, and municipality competes to win the banner that is created every year by an artist of the city, or an international artist. At the moment of victory, the winner of the race will be able to receive the so-called “Palio” and will be able to hang it at its own site to symbolize victory.