The small Italian village of Serralunga d’Alba, with its castle’s vertical outline, is certainly a distinctive landmark in Piedmontese vineyards’ landscape.

The small medieval village has retained unchanged its original urban form, consisting of a concentric rings system, with a defensive curtain wall, where you could access through different entrance gates. The presence of a first urban structure is documented in 1224, while in the half of the fourteenth century the acquisition of the castle is attested by the Marquises Falletti.

Where to stay in Serralunga D’Alba?


What to see in Serralunga D’Alba?

The Castle of Serralunga d’AIba ( Via del Castello, 1) is unique for the exceptional vertical structure with longitudinal rectangular plan, whose corners are protected by towers of different types. Rather than a military role, this building had in the land a control function of the local productive activities, as demonstrates its extremely slender structure that tends to emphasize in this way the prestige of the Falletti’s family.

The estate, since the fourteenth century, consisted of several parts: the Palacium, a compact building composed by large overlapping rooms, a cylindrical tower, with the most innovative characters of the fortified architecture of the fourteenth century, and a inner chapel with a barrel vault and frescoes dating back the mid-fifteenth century. The country house has never been changed in the following centuries, and maintained its medieval configuration. After being purchased by the Italian State in 1949, the castle was restored and brought back to its former splendor.

The castle can be visited with guided tours, on different schedules depending on the season. For information and reservation:
Tel: +39. 0173613358 e-mail: info@casteIlodiserralunga.it »

In the immediate vicinity of the castle is located the old chapel, recognizable from the gpired bell in Gothic forms. Outside the old city walls is situated the parish church of San Sebastiano, 1886 and 1888 in neo-Romanesque style, on the site of the ancient church of bui San Benigno. The interior painting decoration belongs almost entirely to the painter Fedele Finati of Alba. In the apse is instead painted an Adoration of the Blessed Sacrament of Sebastiano Nizza.

In this place is possible to find the wine production of the commune of Serralunga d’Alba. From June 2014 the vineyards are part of the heritage of Unesco.

Among the many estates related to wine production in the municipal area, definitely worth mentioning is the winery Azienda vitivinicola Fontanafredda, a former property of the royal house of Savoy, whose history is inextricably linked to that of Piedmontese winemaking.

The birth of the Azienda vitivinicola Mirafiore & Fontanafredda (Va Aba,15) is due to the King Vittorio Emanuele II who, in 1860, donated it to the sons of his wife Rosa Vercellana Countess of Mirafiori and Fontanafredda, better known as Bela Rosin. The winery consists of, in addition to the facilities dedicated to wine’s production and storage, an independent village provided with a school, a small church, sharecroppers’ homes and after work facilities.

These buildings were all built in the twenties of the twentieth century and are still used by the twelve families who live there. The first winery has vaults with lowered arches, interspersed with arches; it is the winery in which the wine undergoes an aging process in large wooden chestnut barrels.This location is characterized Downstairs by a brick floor crossed by two stone’s lanes, used for transit of wagons and means of production.

Best things to do in Serralunga D’Alba 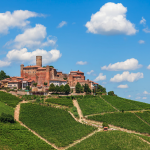