For its strategic position along Via Aemilia Scauri, the village of Neive played a strategic role already in Roman times (100 BC). However its present shape of village * perched on top of a hill, is closely linked to the medieval period: in fact, the con/y cobbled streets 90 up according to concentric rings until the top of the hill called Plan del Castello, referring to the medieval cestrum that nowadays is unfortunately is disappeared. However many testimonies of the primitive shelter are preserved, among which the thirteenth-century fortified house of the Counts Cotti of Ceres.

The building is very celebrated as in this house the Vicar Francesco Cotti wrote the oldest Piedmontese text on the grapevine cultivation and wine production. In the immediate vicinity stands out La Torre dell’orologio (the Clock Tower) – XIII century -, symbol of the ancient municipality, showing on the top revolving candlesticks used for signaling between towers of other villages perched on the surrounding hills.

The big size of the medieval tower contrasts with the sinuous lines of the nearby Baroque architectural structure of the Arciconfraternita (confraternity) of San Michele, a small masterpiece of mid-eighteenth century designed by the architect Antonio Borgese. The building is characterized by the strong upward precision that is determined both from the masonry corner that supports the facade on the right side, and from the compression of the front part of the plant in favor of the apse.

Inside they can see a valuable organ of the Renaissance and in the apse the eighteenth-century painting of San Michele, that impresses with its vivid colors. The processional statue of the Archangel, also of the eighteenth century, is made of polychrome wood. A few steps far from the Arciconfraternita, is situated the parish church of San Pietro and Paolo. Already existing in the Xll century, the building was rebuilt in the XVIII century, the bell tower was designed by the famous architect Francesco Gallo.The latest additions and the unfinished facade belongs to the XIX century.

In particular, the first town hall’s venue with its rococo facade and Palazzo Borgese, that is currently municipal building. In the Town Hall’s wine cellars are located the Bottega dei Quattro vini of Neive, founded in 1983 by a small group of local winemakers to represent Neive and its wines in the world, after thirty years is still the meeting point to buy and taste the wines produced in this area.

Opposite to the square, is located the original Casa della Donna Selvatica (Home of the Wild Woman), dedicated to a particular aspect of the demo-ethno-anthropological heritage of the Langhe.The figure of the Wild Woman was characterized, in the peasant society, as the bearer of an ancient culture, in close contact with nature and its secrets,with jobs linked to seasonality, with the wisdom of old people influenced by popular religiosity and superstition.

These records were reached through the great initiative spirit of the owners thanks to the technicians who co-operate, but also thanks to the outstanding quality of the production environments, that are still perfectly suitable to accommodate the processing cycle of the grapes. The baroque architecture of Neive reaches high levels in the composition of the Palace of the Counts Bongioanni Cocito.

The building stands out for its strong upward push, enhanced by the scenic position of the Porta di San Rocco, the original entrance southwards of the medieval village.The Palace was built in the second half of the eighteenth century according to a design of the architect Borgese. For the integrity of its urban fabric, and the artistic and historical quality of the public and private building heritage, Neive was recognized in 2001 among “the most beautiful villages in Italy”.

Where to stay in Neive, Italy?

Recently passed away at the age of 80 years, Romano Levi was considered one of the last true characters of Langa: he had always Worked in his distillery in Neive, creating one of the world’s most famous handmade grappa. Poet and artist, he was also famous for his labels, that were recently exposed at Palazzo Bricherasio and through them he told the world around him.

He received as inheritance from his iatherthe distiller’s craft and a almost three meter high still, that “to look closely you have to climb a wooden staircase with a few step sand it is nice to go up a bit at the top, as is done with the hills.” His workplace was his house, a farmhouse with a courtyard and a opposite garden. In the morning in front of the strictly closed door of his little office, where grappa was bottled and corked by hand, and where labels designed by the same Levi were stuck with a little brush with lumps of glue, people formed a queue.

Among the fantastic characters that Levi has designed for his labels, the most popular is the wild woman, with a round head and a slim body. in his opinion Wild Women are visions, memories of the past, when he went to school on loot and touched in the streets “beautiful and dishevelled women.

The Palace of the Counts of Castelborgo represents a significant evidence of the relationship between the Piedmontese aristocracy and the local wine tradition. The noble eighteenth century building retains in fact the original wine cellars, that now as before, are venue of famous wine productions.

Here were tested the first procedures regarding the Nebbiolo’s vitrification, in order to get that wine then called Barbaresco Noteworthy is the interior’s decoration and the valuable private chapel.

In the wine cellars of the Palace worked the famous merchant Louis Oudart, who was the first to produce with Nebbiolo’s grapes, a stable and therefore marketable wine, awarded with gold medal at London 1862. in the castle of Barbaresco, thirty years later, it was produced the first bottle of Barbaresco.

Best things to do in Neive 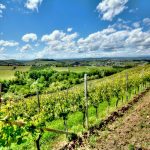