The Mombercelli town’s name is commonly traced back to the Romanesque Bersarium Mons, or Mons Bergerium, but can not be excluded Mombirsan, which in ancient longo bard means “hunting place“.

Several noble families alternated in the domain through the centuries until 1538: in that year in fact the feud passed, by the will of the Emperor Charles V of the Counts Maggiolini Scarampi, the last lords of the village.

The historic vocation of the area for a Barbera production of great value, emerges already in a statistic of the Asti province of 1814, indicating this municipality among those from which the best grapes come from.

Where to stay in Mombercelli?


What to see in Mombercelli

In the highest part of the village stands out a castle, unfortunately in a very bad state of conservation.
There are two small museums: the Museo Storico della Vite e del Vino (Historical Museum of Grapevine and Wine) that was established in 2001 by the municipality of Mombercelli, with the specific desire of “saving” the heritage of traditions and objects of the farming culture, and the it “Museo Civico d’Arte Moderna” (Civic Museum of Modern Art) that is located in a former prison finely renovated in the past decade.

Best things to do in Mombercelli: 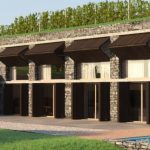