The small Italian village of Castiglione Falletto is placed in a dominant position on a hill between the two branches of the river Talloria (Langhe, Piedmont). The village is centralized around the medieval castle, naturally defended on three sides by steep slopes.

The village probably dates back to Roman times, as evidenced by a plaque found in the walls of the castle. During the Middle Ages, it passed in the hands of the Marquis of Saluzzo and became Cestrum et villa. Later the territory became part of the Delfinato and then, in 1601, of the Duchy of Savoy. 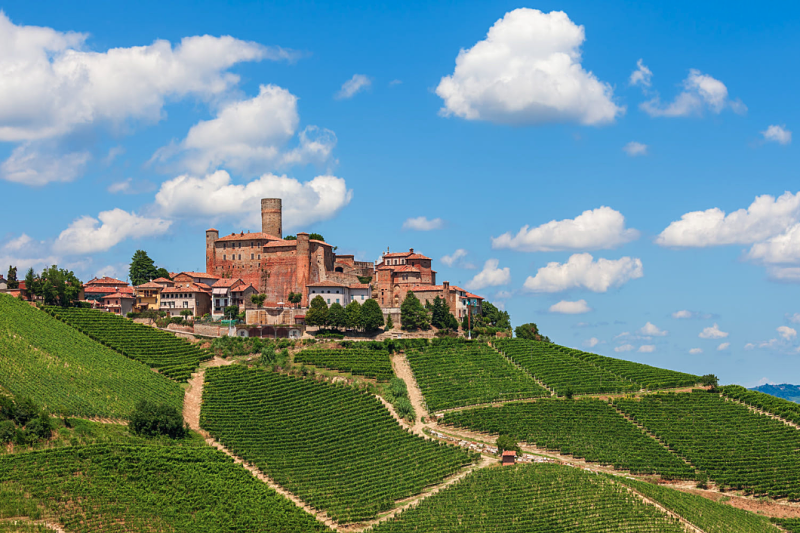 What to see in Castiglione Falletto?

The Castle (Pizza Castello) is a building enclosed inside a regular curtain, reinforced in the corners by cylindrical towers, smaller compared to the main tower, who stands in barycentric place. The mighty cylindrical lower, that has a diameter over seven meters, is still visible today from large distance. The castle was built by Berthold Falletti of Alba, who had received the place as a feud, in 1225, by the Marquises of Saluzzo, in exchange for certain rendered services.

The Falletti, who were owners until the end of the seventeenth century, wanted to add their name to that of the village. After the Falletti succeeded several families, including the Caramelli and the Clarotto, and then, in the second half of the eighteenth century, Giuseppe Cerutti, Arcadian poet, and the Vassallo of Dogliani.

This family realized, again in the mid-nineteenth century, several masonry and renovation work of the Fortress, returning it the dignity of a noble house. Today it continues 10 be privately owned and not open to visitors.

At the bottom of Piazza Castello, a narrow passage leads to the parish church of San Lorenzo, built-in 1893 in neo-Romanesque style, whose churchyard is a privileged observation point on the vineyards of the Bassa Langa and on the village of Serralunga. In the side altar of Sant’ Andrea, there is an oval altarpiece of eighteenth-century attributed to the painter of Bra Pietro Paolo Operti, which portrays the Immaculate Conception, Sant ‘Andrea and San Francesco.

In the immediate vicinity of the castle, is also situated the town hall, wherein its basement is located the Municipal Wine Cellar: born in 2003 thanks to the initiative of a dozen entrepreneurs, currently adhere 26 local producers, in order to promote and enhance the local wines, through guided tastings and wine and food events.

Castiglione Falletto is located in the heart of Barolo DOCG and perhaps the most multi-faceted subzone. On 31th August (fruit day), we held a special wine tasting of Barolo from Castiglione Falletto, we choose some typical crus, namely, Villero, Rocche di Castiglione and Bricco Rocche.
The small town with a medieval castle among green vineyards under blue sky in Piedmont, Northern Italy.

Where to stay in Castiglione Falletto